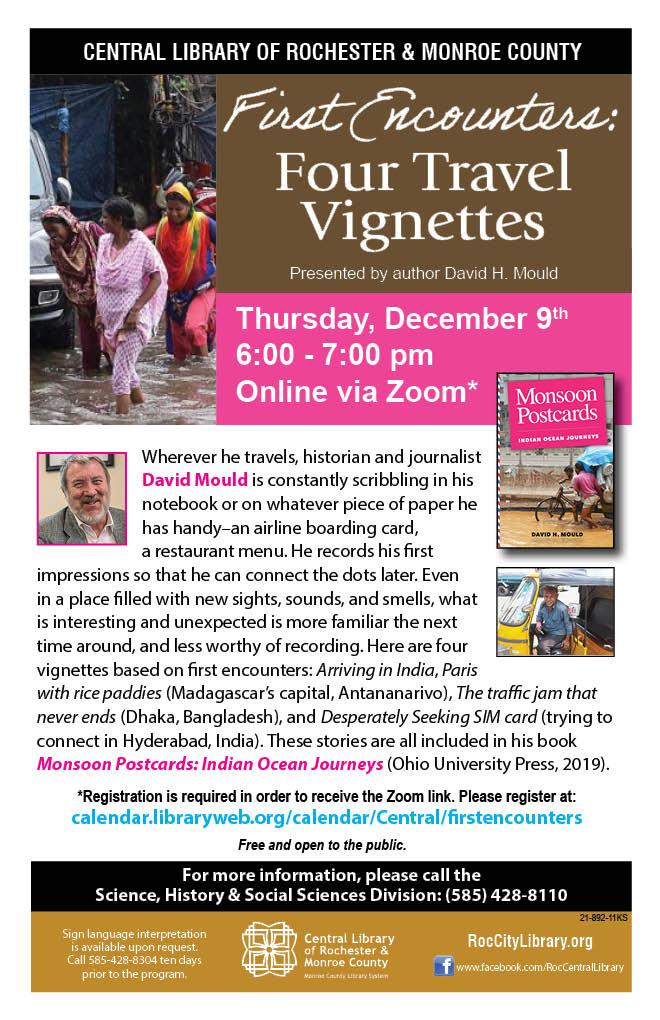 Join us for an online Zoom presentation with David Mould, Historian, Journalist, and Avid Traveler about his experience as he travels through India. Click here to register for this program: https://calendar.libraryweb.org/calendar/Central/firstencounters
Click here for more information about this activity
Please help us keep this calendar up to date! If this activity is sold out, canceled, or otherwise needs alteration, email mindy@kidsoutandabout.com so we can update it immediately.

Wherever he travels, historian and journalist David Mould is constantly scribbling in his notebook or on whatever piece of paper he has handy—an airline boarding card, a restaurant menu. He records his first impressions so that he can connect the dots later. Even in a place filled with new sights, sounds, and smells, what is interesting and unexpected is more familiar the next time around, and less worthy of recording.

These stories come from David's book, Monsoon Postcards: Indian Ocean Journeys (Ohio University Press, 2019). Kirkus Reviews describes David as “a genial travel guide … an academic who does not write like an academic.” Rick Steves, in an interview for his radio show, said: “Monsoon Postcards doesn’t really read like a guidebook, it reads like you’ve got a friend who’s really connected and committed to these cultures. It gives an intimate look at the people and the heritage.”

David Mould, Ph.D., Professor Emeritus of Media Arts and Studies at Ohio University, has traveled widely in Asia and southern Africa. Born in the UK, he worked as a newspaper and TV journalist before moving to the US in 1978. His travel essays and articles have been published in Newsweek, Christian Science Monitor, Times Higher Education, History News Network and other print and online outlets. His other books include Postcards from the Borderlands (Open Books, 2020), and Postcards from Stanland: Journeys in Central Asia (Ohio University Press, 2016).

Central Library of Rochester and Monroe County
*Times, dates, and prices of any activity posted to our calendars are subject to change. Please be sure to click through directly to the organization’s website to verify.